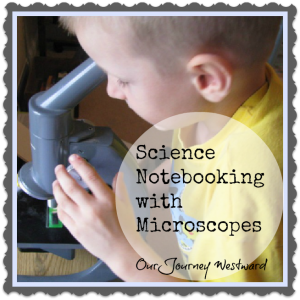 Notebooking with kindergarteners??  Isn’t that asking too much?

No way…especially when it comes from authentic, meaningful experiences!

We own a modest microscope

and some simple prepared slides

that made for a wonderful science notebooking lesson last week.  Just having these things sitting out was enough to spark an interest that lasted nearly an hour.

Eli began the lesson by simply exploring the slides and how to work the microscope.  He kept telling me, “Mom, you’ve gotta come here and see this!”  Over and over again as each new slide came into focus he would say the same thing with such excitement in his voice.

I asked if he would like to draw some pictures of the magnified images to put in his nature notebook, which he thought was a great idea.  Notice, I didn’t say he HAD to draw pictures for his nature notebook.  I could have, of course, but with little people, the real learning usually best takes place when something like notebooking isn’t forced.

Slide after slide, Eli grabbed a new piece of paper.  After looking at his specimen carefully three of four times, he would run to the art shelf to grab just the right crayon, marker or pencil.  After several more peeks into the microscope, a drawing of each slide would emerge.  I was amazed at how much his drawings actually looked like what he had observed on the slides!

I let him work to his heart’s content.  With each new drawing, I was called over with, “Look, Mom, does this one look like the slide, too?”  And, because he wanted to remember what he had drawn, I helped him label and date each of his pages.

A little freedom, interesting materials just waiting to be touched, and gentle suggestions.  Man, what our children will take off and do when given the chance.  (By the way, we never got around to the reading and math workbooks that day.  I don’t think it mattered, do you?)