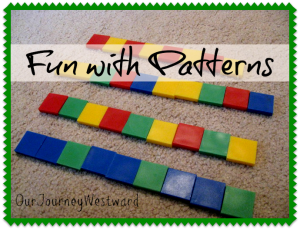 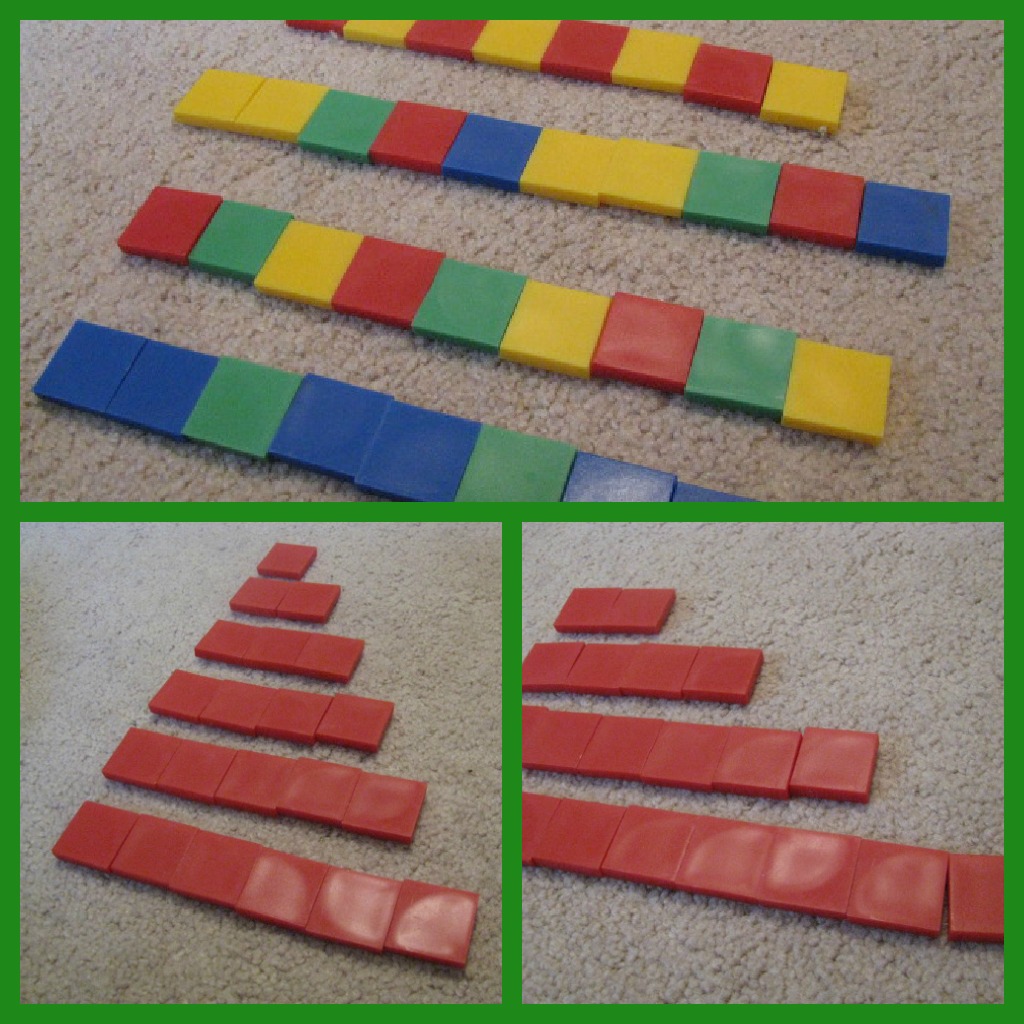 Top Photo: Begin a simple pattern (using any manipulative you like) and ask your child to continue the pattern.

I might also do a clapping pattern as I am talking to reinforce the idea that a pattern repeats itself.  For example, using the above pattern of blue, blue, green, I might clap, clap, stomp along with the words.

Bottom Photo:  Simple growing patterns are easy for little ones to understand.  In the first picture, I placed both the top row (1 block) and the second row (2 blocks) and asked my kindergartener how many he thought might be in the 3rd row.  We kept building new rows until he understood each row grows by one block.  I used the same approach in the second picture. 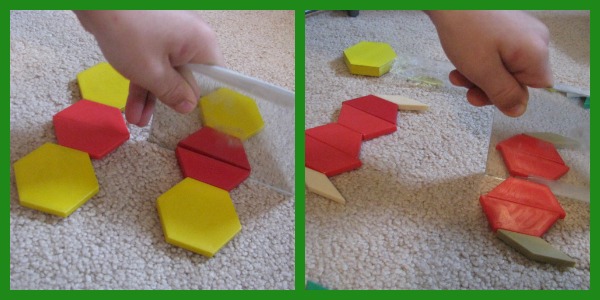 Symmetry is a tough concept for young learners.  An easy way to help gain understanding is by using a small mirror.  I built very simple 2 and 3 piece pictures from pattern blocks

.  Then, I held a mirror up next to the blocks so Eli would see the entire shape that I wanted him to build.   While I held the mirror in place, he would use pattern blocks to build what he saw.  After doing this a few times, I was able to leave him alone to create some on his own from start to finish. 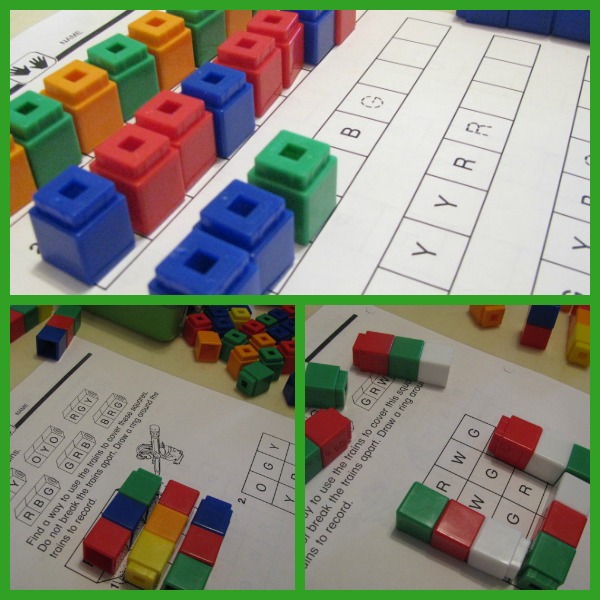 Using a book like Developing Mathematics with Unifix Cubes, K-3

can help you (the teacher) understand how to use your math manipulatives and offer you all kinds of wonderful lesson ideas.  Using pages from an out-of-print book, in the photos above Eli was able to practice both patterning and logic/critical thinking using our unifix cubes.  I love having some open-and-go, hands-on resources! 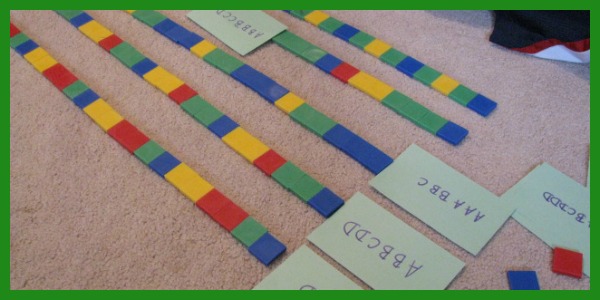 In this activity, I simply named some patterns on notecards and asked my son to build the patterns with color tiles

.  We reversed the activity, too, where he named the patterns and I made them from color tiles 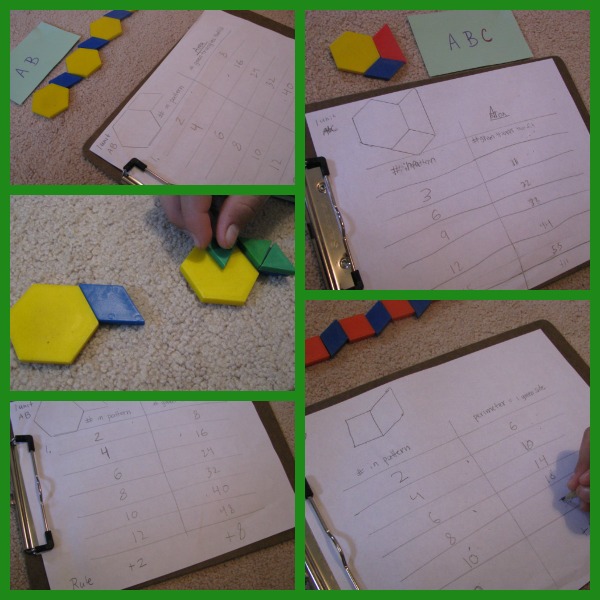 I love this next activity!  It measures the area or perimeter of a pattern’s unit and remeasures as each additional unit is added to the pattern.  A chart is created that shows relationships between the growing numbers.

Let me see if I can explain it…

.  One unit includes both the A and B.  In the photos on the left (above), the unit contains a yellow hexagon and a blue diamond.

2. Using a green triangle (the smallest of all the pattern blocks), measure either the area or perimeter of the AB pattern.

4. Add another unit to the pattern. (In this example, it will now look like ABAB.)

5. Again, measure the area or perimeter of the entire pattern and fill in the chart.

6.  Continue adding one unit at a time, remeasuring and noting data until your child can tell you the “rule”.  In other words, the rule for the number of cubes in this pattern is +2, while the rule for the area is +8. 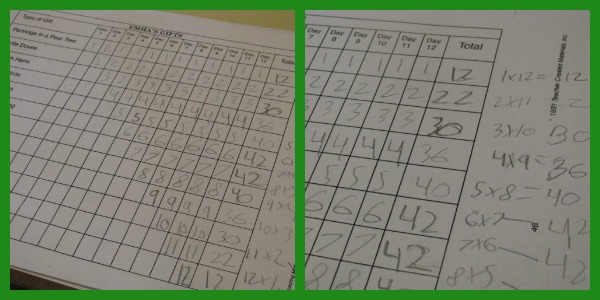 With Christmas approaching, I thought this was a fun math activity.  It’s based on the song, “The Twelve Days of Christmas.”  Your child’s job is to create a chart showing how many of each gift is given over the course of the song.  Then, using addition and/or multiplication, figure out how many of each item is given over the twelve days, as well as how many items total.  Fun!

Be sure to skip your way through all the other bloggers taking part in the Hopscotch, too!